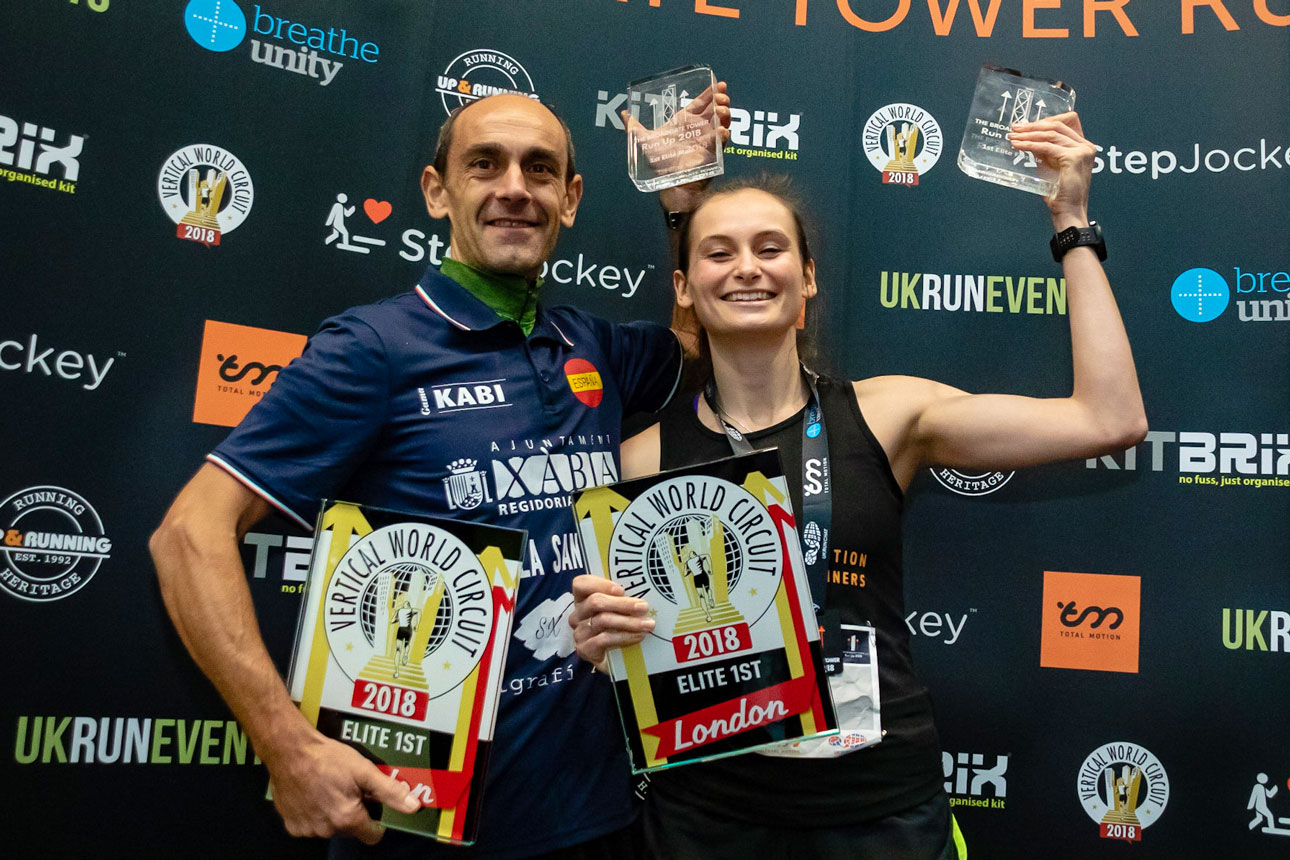 A new record was set at the London stage of the 2018 Vertical World Circuit®, Saturday, November 24, the semi-final of the nine-race skyscraper racing tour.

The 35 floors and 877 steps of the Broadgate Tower Run Up were the challenge for 300 runners including an elite field from 17 countries.

Briton Sarah Frost smashed her own record set here last year by an incredible three seconds to close in 5’04”. “I can’t believe I got the record again. I was hoping to beat my own record which I did, but to win again with all these amazing athletes, I’m really happy! I’m looking forward to next year’s VWC races!” 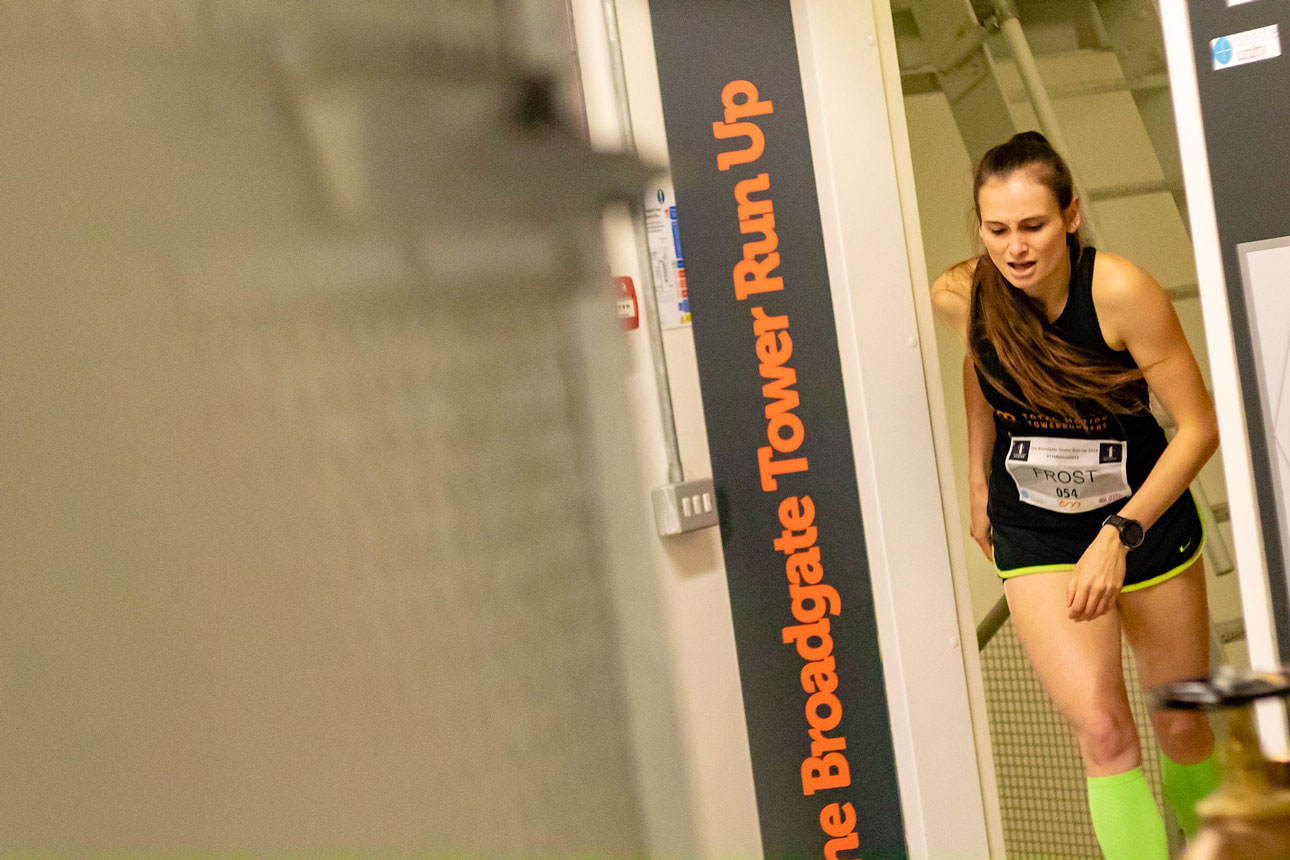 Second was Spaniard Maria Beltran just one second behind and, closing the podium, was Japan’s Yuko Tateishi in 5’09”. Her position here elevates her to an excellent second place on the current VWC ranking.

In the men’s field, Spaniard Ignacio Cardona, 44, was ecstatic with his win, his first on the Vertical World Circuit® after ten years of competing. He was the top finisher in a strong Spanish group, who all placed in the top five. “This is my first win on the Vertical World Circuit®, my best performance!” he commented. “I trained hard as usual and I’m very pleased as the London race was my objective. Now I will rest to be ready for the final in Hong Kong next week,” he said. 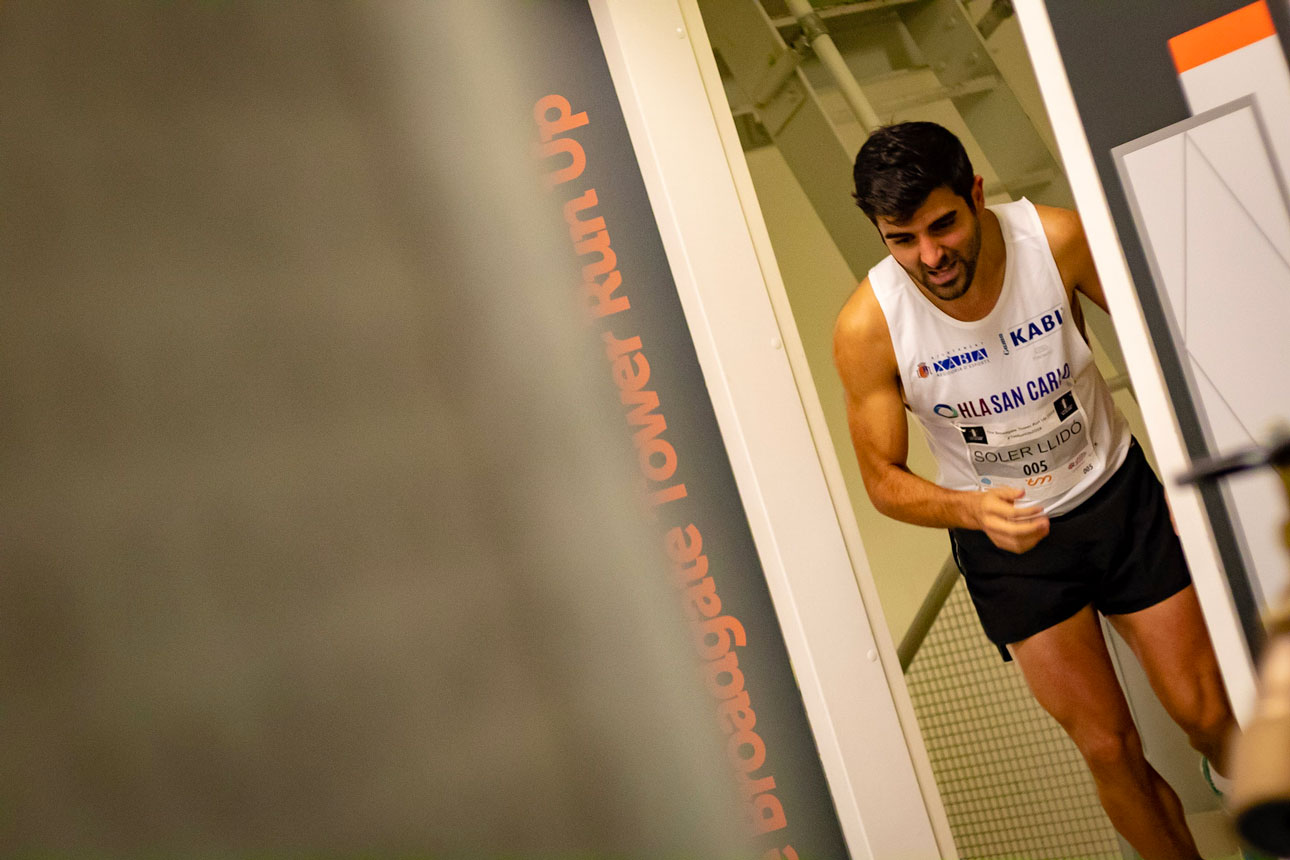 The Broadgate Tower Run Up was one of three races after New York and Beijing to award an extra 25% bonus points for the ranking.

The third edition of the Broadgate Tower Run was for the first time an official race on the Vertical World Circuit®. Organiser of the event, Total Motion CEO, Matt Hudson, commented, “We at Total Motion Events were honoured that The Broadgate Tower Run Up was chosen to host round eight of the 2018 Vertical World Circuit®. Amazing to see the best international athletes compete for the coveted prize and provide a real focal point to what was an incredible day of stair climbing.” 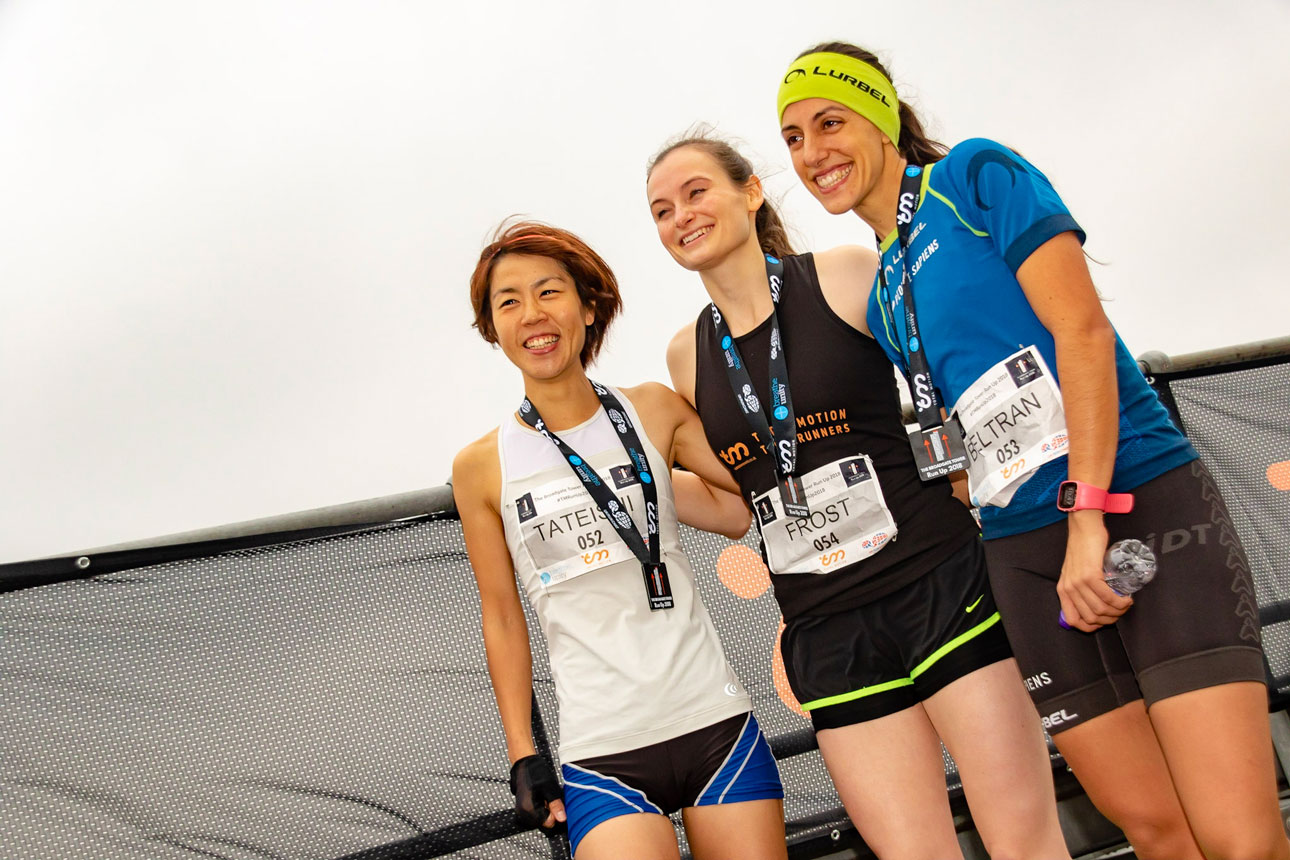 The VWC rankings after the semi-final continue with Suzy Walsham in the lead, now followed by Tateishi in second while Rosalyn Russel and Cristina Bonacina slide to third and fourth respectively. Alice McNamara drops to fifth and race winner Sarah Frost climbs to sixth.

Piotr Lobodzinski and Ryoji Watanabe remain in first and second position on the men’s ranking, while yesterday’s race winner Ignacio Cardona is now on the provisional podium, with Omar Bekkali sliding to fourth.

With the Grand Finale just one week away, Mark Bourne and Ryoji Watanabe still stand a chance to topple the seemingly invincible Lobodzinski. With five straight wins Walsham will go into the final, yet again, unassailable – even with an extra 50% bonus points at stake here. 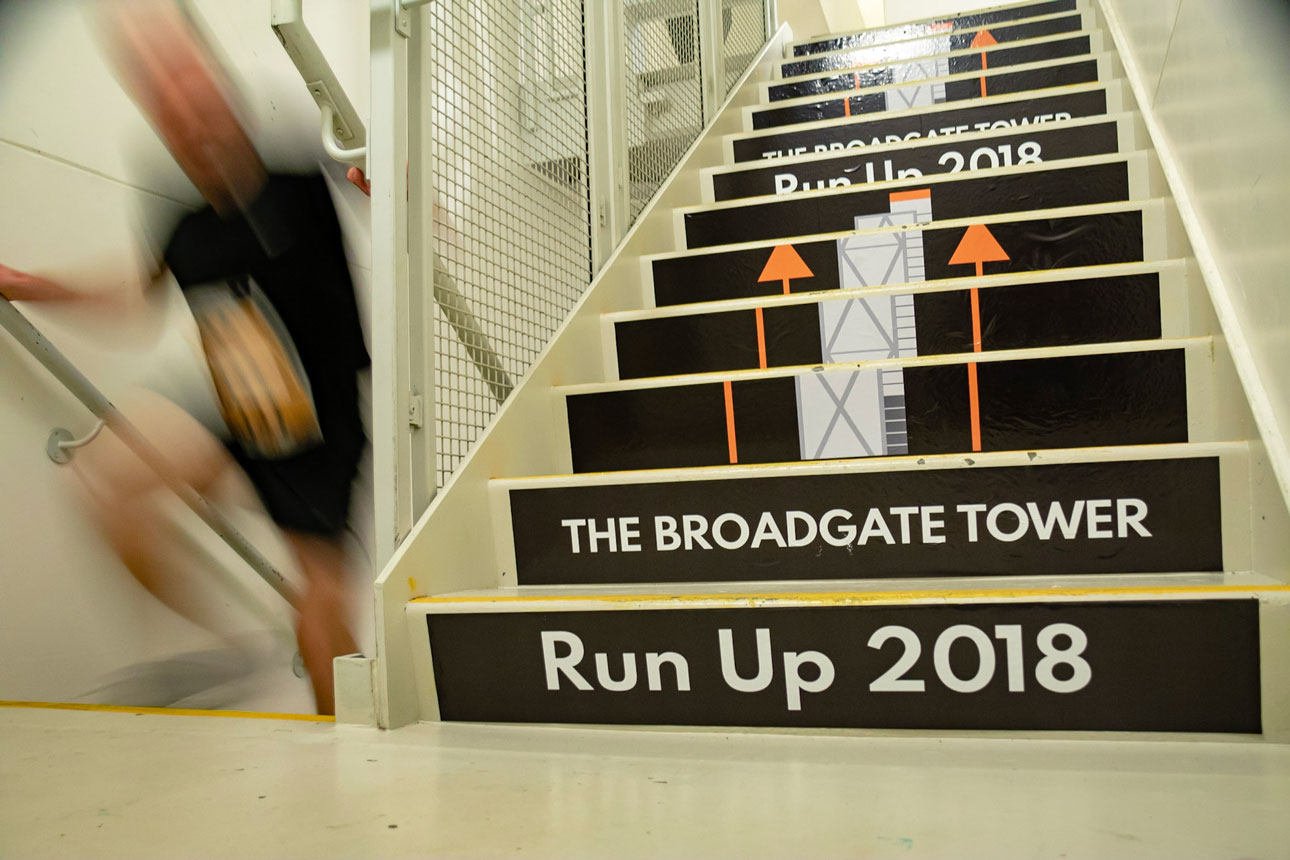 The Broadgate Tower Run Up, London, semi-final of the 2018 Vertical World Circuit®. ©benlumleyphoto.co.uk

After the London stopover eight races have taken place on some of the world’s most iconic skyscrapers. The Grand Finale of the 2018 Vertical World Circuit® will take place in Hong Kong on Sunday, December 2, with the SHKP Vertical Run for Charity: Race to Hong Kong ICC where the world champion titles and VWC end of season cash prizes will be awarded.