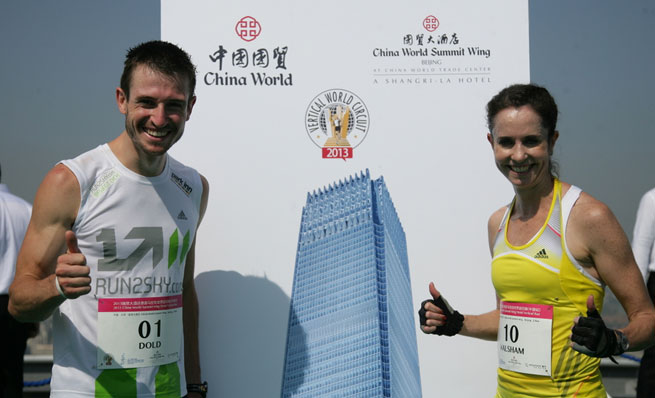 The fourth stage of the Vertical World Circuit saw top international runners together with 600 competitors from 22 countries race up the 2,041 steps to the observation deck on the 82nd floor of the 330-metre-tall building, Beijing’s highest skyscraper.

The ladies’ race was strongly led by standing VWC Champion Suzy Walsham who opened a gap of just over a minute on China’s Xue Gan, second, and New Zealander Melissa Moon, was third in 13’09”. 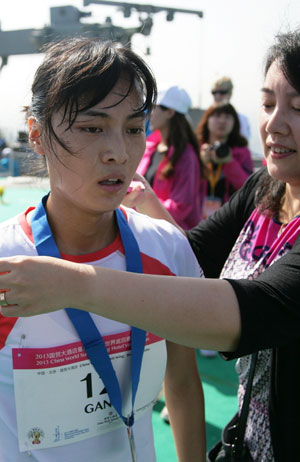 The Beijing race is the first in the eight-race VWC that Dold has taken on this year. The four-time VWC Champion was sick at the New York event, so today’s 100 points for the win place him a mere 10th on the ranking. However, the circuit is only half way through and with four races to go, he’ll have every opportunity to defend his title. Lobdzinski moves up from third to lead the men’s ranking.

Suzy Walsham has a clear lead in the women’s ranking with three outright wins which include New-York and Basel. Melissa Moon moves up to second position ousting Italy’s Valentina Belotti, the Taipei winner, who now places third.

In the VWC’s first major race on mainland China, the local runners proved they can climb on the podium with the world’s top specialists.

The observation deck of the China World Summit Wing Hotel offers a bird’s eye view over this incredible new city – worth every lung-bursting step and both Dold and Walsham confirm the experience as “extraordinary”. 28-year-old Dold said, “The highlight is the fantastic view over Beijing when reaching the finish line. It makes the whole effort worthwhile.”

Walsham also commented, “Having trained so hard for this race, it is the sweetest victory.” I had to dig deep today to win.”

As the official charity of the event, all proceeds from paid race entries will be donated to China Rural Kids Health Care, a programme supporting disadvantaged kids in China by providing insurance.

The eight-race Vertical World Circuit stays in Asia for the 5th stage in Vietnam with the Landmark 72 Vertical Run in Hanoi on September 15.