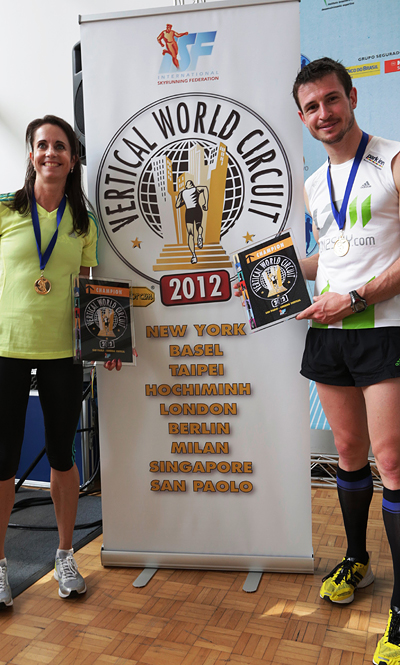 Great anticipation has been building up for today’s New York race with Thomas Dold, unquestionably the world’s top specialist in this fast growing sport, having won the race no less than seven times. Pressure is mounting from upcoming adversaries, like fellow countryman Christian Riedl, second last year and Australia’s Mark Bourne and Darren Wilson, close finishers in New York, Taipei and Singapore. Heading the line-up will also be American Rickey Gates, an accomplished mountain runner who placed strongly in 2007 and 2008. In the face of such strong competition can Dold live up to his infallible prowess?

“Down Under” figures high on the New York skyline. Heading the women’s field are recently crowned VWC champion Suzy Walsham who counts three wins here in 2007, 2008 and 2009 and fellow Australian, Alice McNamara, 2011 winner. The line-up includes four-time winner American Cindy Harris. Notable absentees are last year’s winner, Melissa Moon from New Zealand and Italy’s Cristina Bonacina, second. Bonacina has taken a break for health reasons but is aiming to take part in the rest of the circuit.

1,576 steps and 86 flights are the hallmark of the Empire State Building Run-Up. Held annually since 1978, this iconic race represents a real challenge with long standing records hard to beat: 9’33” by Australian Paul Crake in 2003 and 11’23” by Austrian Andrea Mayr in 2006.

Nine races stretch across the globe from New York, to Basel, Madrid and Barcelona in the heart of Europe and on to Taipei, Beijing, Hanoi and Singapore in the Far East, closing in Saõ Paolo in Brazil where the 2013 VWC champions will be crowned.

High altitude, whether in the mountains or the city, is the exclusive arena of the International Skyrunning Federation (ISF), which governs, promotes and sanctions skyrunning (high altitude mountain running) and skyscraper racing worldwide.